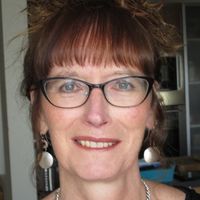 Having had successful careers in both scientific research and teaching, Wendy took early retirement from the headship of a Prep School on Teesside when her husband's job was relocated to Edinburgh. Since then, art has become her raison d'être (along with singing!) and she has undertaken courses in both practical art and art history. In 2015 she completed a Contemporary Art Practice course at Leith School of Art under Leesa French and in 2016/17 studied Printmaking with Nick Devison at LSA. She is currently enrolled in Pottery classes at Poldrate Arts and Crafts Centre, Haddington, taught by Lorna Chamberlain. Wendy lives in Rigfoot near Duns in the Scottish Borders and has a studio there. Her prints and paintings are sold at 'Marehalm', Bridge Street, Berwick-upon-Tweed.

Wendy gains inspiration for her printmaking and painting from the stunning locality in which she lives. Her house looks out on the dramatic moorland of the Lammermuir Hills and it is only a short distance to the wonderful coastline of the the Borders and North Northumberland. She also takes as her subjects commonplace items, intrigued by their simple, oft unappreciated beauty. She particularly enjoys encaustic painting, which she learnt from artist and tutor, Jemma Derbyshire. However, her contemporary art practice is concept rather than process driven; she strives to use her artwork to make pertinent comment about major issues faced by society today. Environmental pollution, her area of research in the past, is a key concern, as is the continuing underachievement of women and gender stereotypical expectations placed upon many girls from the youngest age - what Wendy would term the 'pink culture'. She believes strongly that a dialogue between art and science, as was the norm in Renaissance times, is mutually beneficial for artists and scientists in the 21st century, also engaging the public mind on scientific issues.

Her work in ceramics has taken inspiration from the early liaison in the British Studio Pottery Movement between Bernard Leach and Japanese potter Shoji Hamada.
Next
Previous